A new Gestalt for Hi-Fi

When the vision of the wholistic audio system emerged between the later founders of Lyravox, the technology to make it happen was not even there. But what was there was the conviction that audiophonic greatness does not rely on huge equipment, and that it can come in the form of an interior friendly audiopiece instead of the traditional multi-box setup. Being witness to the total degradation of audio culture through the advent of the audio gadget, the idea was born to start a counter-revolution. Upon the foundation of Lyravox in the summer of 2013, not only loudspeaker quality had reached new heights, also the electronics in front of the audio chain had seen breakthroughs which called for the total seamless integration of speakers, amplifiers, and signal processing. Fortunately, the integratable electronics of today are so fine that they would be our preferred choice even in a system of unlimited size. They are the DNA of the Lyravox family of wholistic audio systems.

„If people knew what they are missing out on…“

As the icing on the cake, audio streaming – the online availability of the recording file – had simultaneously reached grown-up status both in terms of quality and program coverage. Today it is even superior to the CD thanks to a smoother signal transport and higher audio resolutions, while offering instant access to almost any modern-time musical performance ever put on record. The integration of this technology into a wholistic audio system results in the ideal domestic music reproduction instrument – even without considering the convenience factor.

For more than 15 Years, Lyravox co-founder Jens R. Wietschorke had produced every single unit of custom loudspeaker or audio component with his own hands, just like a musical instrument maker. All of his work was bespoke, fully matched to the demand of the studio or private home it was made for. There were no standard solutions, that’s why there are hardly any loudspeaker drivers or components Jens did not work with. (And because he needed to get to know all of them to identify the best.) Becoming an associate professor of loudspeaker acoustics at the Hamburg SAE audio engineering faculty was a by-product of his constant search for the total understanding of a loudspeaker, far beyond technical data or textbook knowledge.

Despite his obsession for acoustical physics and fine crafting, it was the passion for the perfect music reproduction experience that brought Jens together with Dr. Goetz von Laffert, an economist who turned out to share the same passion and understanding of what an audio system should deliver, regardless of technology. Representing the other half of the table – the system user – he keeps challenging Jens in the pursuit of the total listening experience. The joint vision of Jens & Goetz of the reformation of home audio led to the foundation of Lyravox, the world’s first and so far only manufacturer of consequently wholistic high-end audio systems. All of these systems are still completely handmade, extensively customizable, and radical in terms of component quality, acoustic approach, and appearance. We find this anti-industrial attitude to be most appropriate for something as rich and subtle as music.

However, the breakthrough that the wholistic audio design marks, relies on high tech as much as on fine craft. Sascha Harbs, experienced both in high end audio design and in custom installation, is responsible for the preservation of the state of the art of the Lyravox products in terms of electronics, software, and acoustic hardware. Thanks to his industry network, quite a number of breakthrough component releases see their first implementation in a Lyravox system – yet strictly only if they prove to deliver actual sonic improvements. 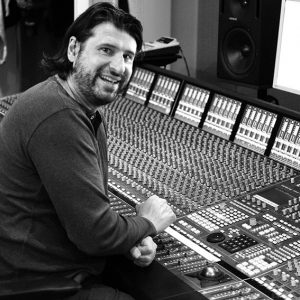 Marc Schettler is the ‚unusual’ member of the Lyravox Development Team, demonstrating the difference of the Lyravox approach: Marc is the owner and operator of the renowned Hafenklang recording studio, regularly working with well known acoustic heroes and creditable for a number of first class recordings. He is responsible for the fine-tuning of all Lyravox systems, using his own recordings and the knowledge of the sound of the original musical act. A large part of the measuring and intonation of our systems takes place at the Hafenklang Studio, thereby consequently closing the circle between perfect recording and perfect reproduction.

With product design and exterior aesthetics being one of the key elements of the Lyravox approach, Gyde Nissen takes some major responsibility within the team. Renowned for her work at Hadi Teherani design group, she has a broad track record of projects in the interior and furniture sphere, including some already well known pieces. Under her own label she recently launched the modular storage system ‚in l between‘, which incorporates a number of furniture design innovations. Gyde not only keeps an eye on the interior design compatibility of all Lyravox Audiopieces, she also engineers fine furniture cabinetry into all Lyravox system enclosures. Check our her work at www.gydenissen.de.

„The sound of music is a far more complex sensation then any vision – And as much bigger is the potential pleasure it contains.“